Head for the Mountain

Pitch black, bone weary, and jet-lagged, we landed in Chennai India at 5:00 AM after 28 hours in transit. We were exhilarated as you can only be when you land in a new country for a 4 month adventure. On a surge or adrenalin, we felt we still had the energy to carry on for another hour or so. With no hotel reservations to interfere, we decided not to stop in Chennai, a.k.a. Madras, a too big city of over 8 million people.

After picking up our checked back backs, clearing customs, we headed for the money-change booths. The bank agent confirmed what my online search had intimated. It was unnecessary to go into Chennai to get a long distance 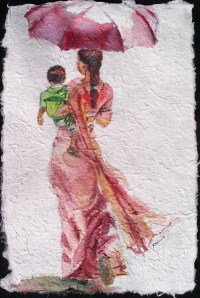 bus to Mahabalipurin, a small coastal town 2 hours south of the the city. “Its easy to take a bus from here at the airport to Mahabalipurin”, he explained in heavily accented but perfect English. Mahabs is a place renown for dance, music, the ancient ruins and the stone sculpture. We planned to stay several weeks as it takes us that long to recover from jet lag.  The agent further instructed us, “Exit the terminal building, cross the parking lot. Cross the major road outside the airport and pick up a #6 bus on the other side.  This bus will take you a few miles to a junction. There you pick up a second bus that goes direct to Mahabs.” “But how will we know we are going the right way,” I asked plaintively. He thought for a second and replied, “When you get outside, just head toward the mountain”.

We left the terminal at 5:30 AM. It was still pitch dark. There is no darkness like the darkness in India. Most places in India are not electrified. Beyond the lighted airport parking lot, more blackness……no streetlights, house lights or shop lights anywhere. And no visible mountain! Just when I started to lose hope, I noticed a dim light several inches up on the distant horizon. A star? A solitary electric light? Since it was the only light around anywhere, we headed towards it hoping it was an light up on the mountain. Crossing the parking area, we politely fended off all the the taxi or auto-rickshaw touts who clamoured to get us into their conveyances and indeed promised to take us all the way to Mahabs. 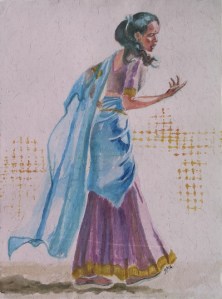 We crossed over the road and stood at the bus stop with a few early rising commuters. But we were still in trouble having forgotten that while educated Indians speak English, it takes us awhile to become accustomed to their accents……we had a bus number but didn’t know if we were at the right stop or on the right road or going in the right direction. It was still pitch dark. We lugged our heavy back backs up onto the first # 6 bus to lumber along and paid our fare. Almost immediately, the conductor told us it was not the right bus and to get off. Off we stepped. After inquiring from 3 or 4 very friendly barely comprehensible people, we were directed to board the next #6 bus. It came along promptly. We paid again…..only 7 Rupees each (about 21 cents)…so not a serious loss.  Our initial exuberance was fast wearing off. We were getting scared. We argued then about which one of us had gotten us into this mess. That rickety bus took us about 5 miles. We got off when told to get down and then waited for another one, all the while getting differing instructions from each person who spoke to us.

Finally along came a what looked more like a school bus. It but it had the right number so we boarded. Hurray! The dawn was arriving and we were finally seeing the light of day…. no small comfort after all the darkness! 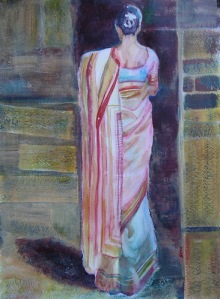 This bus bumped along for about an hour depositing people along the way and we finally arrived in Mahabs. More hurrays. I left Michael with the bags at a tea shop drinking sweet tea and munching on great small coffe cakes flavoured with cardamon. I took off unencumbered to find us a pension. One half hour later, I was back. We hired a rickshaw and were settled into our small $10 a night hotel by mid morning.

What an adventure! Are we crazy we wondered as we fell asleep in our new accommodation one block from the beach.

This entry was posted in Uncategorized. Bookmark the permalink.